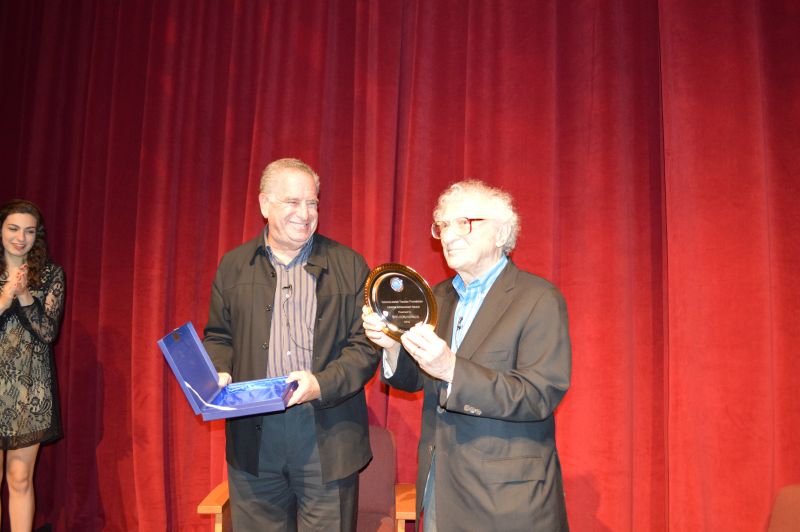 Many of us are fond of intimate fireside chats, myself included. Last night's Sheldon Harnick: A Conversation & Celebration at San Diego's JCC Garfield Theatre took place on a stage in front of an audience, but the heartfelt exchange between Broadway lyricist icon Sheldon Harnick and his longtime collaborator Arnold Mittelman evoked the coziness of a late-night dialogue between bosom buddies in front of a crackling blaze in the rare New York apartment with a fireplace. The overture to this captivating conversation consisted of musical selections from Harnick's oeuvre, sung with verve and passion by an assortment of performers, and the evening culminated with Mittelman's presenting Harnick with the National Jewish Theater Foundation's Lifetime Achievement Award.

Clearly Harnick and Mittelman know each other well enough to chatter nonstop without missing a beat, despite the crowd of eager attendees watching and listening. Mittelman's intriguing questions flowed seamlessly into each other. Harnick's straight-from-the-heart responses tripped off his tongue with just as little effort, as if springing forth from the panoply of lyrics he himself had composed; his beguiling, passionate storytelling charmed and mesmerized the enthralled audience.

Harnick's eyes sparkled as he related tales of his dazzling career, working with the foremost luminaries of the Broadway world: the collaboration with Jerome Robbins, whose eyes misted as he contemplated the parallels between the Russian shtetl in Fiddler on the Roof and the one from which his Polish relatives fled under similar circumstances; the insider story of the frosty no-love-lost relationship between Robbins and Zero Mostel, which was put right with an icebreaking laugh-out-loud joke. The difference, Harnick said, between simply writing words for a song and being a theater lyricist is that the lyricist must get inside the character for which he or she is creating words.

This kind of insider information, recounted with deep love and touching insight and charm, kept the audience poised on the edge of their seats for the entire evening. Just as affecting was Harnick's heartfelt evocation of his wife Margery as his muse and inspiration.

The singers all performed capably. Broadway and San Diego theatre veteran and JCC's J*Company Theatre Artistic Director Joey Landwehr, charged with the daunting task of opening the show with a rendition of "She Loves Me" with his icon Harnick seated front and center right before him, accomplished the undertaking with humor, aplomb, and vocal expertise. Sixteen-year-old Samantha Tullie showed great vocal and dramatic promise in her sweet-voiced interpretation of Fiddler's "Far from the Home I Love." Hal Grant's lively version of the iconic "If I Were a Rich Man" grabbed the crowd's attention.

To cap the evening after the NJTF award presentation, well-known theatre personality Jordan Bennett, who is playing the lead role of family patriarch Mayer Rothschild in Rothschild and Sons, sang the touching "power" ballad, "In My Own Lifetime," from the original 1970s show. Bennett has a special history with the song, which he performed in the Catskills in the first one-man show that catapulted his career. Harnick, who listened with his eyes closed, seemed transported. With slight gestures and smiles, he followed along with the music, firmly nodding his approval at the end.

To be in the presence of Sheldon Harnick is to be in the presence of genius - but genius without pretense or affectation. From the evening's first moments, Harnick's warm personality and sense of humor drew in the audience and kept them riveted until the very last second. His brilliant ninety-year-old mind remains sharper than a silver tack polished to a gleam, and would put to shame most people far younger than his age. Mittelman joked that Harnick is a very young 52 years. "Turn that around to 25," came Harnick's riposte.

Special thanks are due to David Ellenstein, Artistic Director of North Coast Repertory Theatre, which along with National Jewish Theatre and San Diego Center for Jewish Culture is hosting premiere readings of the reimagined Rothschild and Sons Sept 22 (sold out) and 23 (limited tickets available); and Nancy Richards, whose tireless work behind the scenes helped make the event a rousing success.