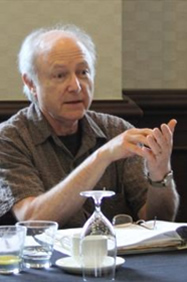 Robert (Bob) Skloot retired in 2008 after 40 years of teaching, directing and administrating at the University of Wisconsin-Madison. His career has included serving as Fulbright Professor in Israel (1980-81), Austria (F 1988), Chile (F 1995) and The Netherlands (S 2005), and as Fulbright Specialist in England (2013). He is the author and editor of many books and essays about the theatre of the Holocaust and genocide, including The Darkness We Carry: The Drama of the Holocaust (1988) and the two-volume anthology The Theatre of the Holocaust (1981; 1999) and The Theatre of Genocide: Four Plays about Mass Murder in Rwanda, Bosnia, Cambodia and Armenia (2008). In 2011, Skloot was chosen for inclusion in Fifty Key Thinkers on the Holocaust and Genocide, ed. Bartrop and Jacobs (2011). Over a generation, Skloot has presented scores of lectures throughout the United States and internationally on subject that include: the Arts of the Holocaust, the Theatre and Genocide, Holocaust Education, American Theatre and Drama, etc.

Skloot’s play, If the Whole Body Dies: Raphael Lemkin and the Treaty Against Genocide (2006), has been read around the U.S. and internationally (Sarajevo, The Hague,) and in its Spanish version (Aunque Todo El Cuerpo Muera) in Cuba and Peru. Polish, German and Hebrew translations have been recently completed.