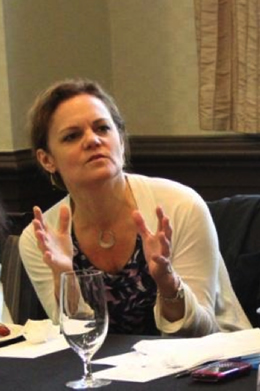 Teresa Eyring is Executive Director of Theatre Communications Group (TCG), the national organization for theatre in the U.S. In addition to its roles in federal advocacy, professional development and networking within the theatre community, TCG is the largest independent trade publisher of dramatic literature in North America. Prior to arriving at TCG, Eyring spent 20 years as an executive in theatres across the U.S. Positions included Managing Director of the Children’s Theatre Company in Minneapolis, Managing Director of the Wilma Theater in Philadelphia, Assistant Executive Director of the Guthrie Theater in Minneapolis, and Director of Development for the Woolly Mammoth Theater Company in Washington, D.C. Eyring holds a BA from Stanford University and an MFA from the Yale School of Drama. She is a member of the boards of the Performing Arts Alliance and The Actors Fund. Under her leadership, TCG has adopted a strategic plan with a major focus on diversity and inclusion, as well as audience and community engagement. With this plan, TCG articulated a new, unifying vision statement. In summary it is: “A better world for theatre. A better world because of theatre.”