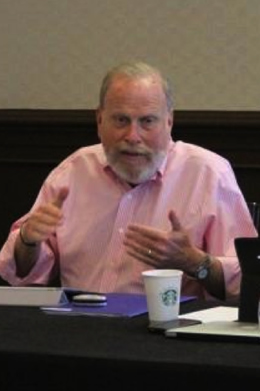 Dr. Jeffrey R. Solomon is the President of the Andrea and Charles Bronfman Philanthropies, a group of foundations operating in Canada, Israel and the United States. Among the foundations’ innovative launches are Birthright Israel and Reboot, two initiatives aimed at connecting young, assimilated Jews to their tradition, The Gift of New York, a powerful response to September 11, helping to heal families of victims through the power of culture, and Project Involvement, an educational reform program serving some 265,000 Israeli elementary school students. He previously served as the Senior Vice President and Chief Operating Officer of UJA-Federation of New York.

Other past positions include executive positions at Altro Health & Rehabilitation Services, Miami Jewish Home and Hospital for the Aged and Jewish Family and Children’s Services in Miami. Dr. Solomon also served with the City, State and Federal Governments. An author of over 80 publications, he served as an adjunct associate professor at New York University and sits on numerous nonprofit and foundation boards including the FJC, a community foundation in New York, the Jewish Funders Network and Musicians On Call. He also served on the Board of the Council on Foundations, where he chaired the Committee on Ethics and Practice and served on its Executive Committee. He is a founding trustee of the World Faiths Development Dialogue and has received a number of honors from professional associations and universities.

His widely acclaimed book, The Art of Giving: Where the Soul Meets the Business Plan, co-authored with Charles Bronfman, was published by Jossey-Bass in October, 2009. It has been awarded the Axiom Gold Medal in philanthropy and has been translated and published in South Korea. They recently completed a sequel which explores the principles and practices of social entrepreneurship, expected to be released in early 2012.