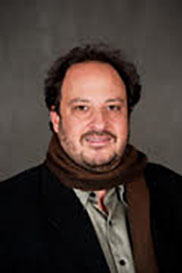 Derek Goldman is an award-winning stage director, playwright/adapter, developer of new work, educator, and published scholar, whose work has been seen around the country, Off-Broadway, and internationally.  He is Professor of Theater and Performance Studies at Georgetown University where he is co-Founding Director of the Laboratory for Global Performance and Politics (with Ambassador Cynthia Schneider),  housed in the School of Foreign Service with a mission "to harness the power of performance to humanize global politics."  He has worked at theaters such as Steppenwolf, Lincoln Center, Arena Stage, CenterStage, Folger Theater, Round House, Everyman Theatre, Mosaic Theater,  Synetic Theater,  Theater J, the Kennedy Center, Ford's Theater, McCarter,  Segal Center (Montreal), Northern Stage, Forum Theater, Olney Theater Center (where he is an Artistic Associate),  and many others. He is the author of more than 30 professionally produced plays and adaptations, including work published by Samuel French and produced internationally, and he has directed over 80 productions.  Recent highlights include A Streetcar Named Desire at Everyman (Wall Street Journal Best of 2016); his adaptation of David Grossman's Falling Out of Time (Theater J); Diary of Anne Frank (Olney) and many others. He has a 25 year history of writing and directing Holocaust-related plays including his original play Right as Rain which toured nationally for 3 years; Our Class (Theater J, Helen Hayes Nominated for Outstanding Production); and My Report to the World,his play about Polish World War II hero and Holocaust witness Jan Karski featuring David Strathairn which has been performed in Poland (in conjunction with the opening of the POLIN Museum of the History of Polish Jews); New York (in residence at the Museum of Jewish Heritage), and  DC (Georgetown and Shakespeare Theater/Harman Center).  In 2016 he was honored to receive the prestigious President's Award for Distinguished Scholar-Teachers. From 2007-2016, he served as Artistic Director of the Davis Performing Arts Center at Georgetown. He is  co-President of the US Center of the International Theatre Institute (ITI), a Board member at Theatre Communications Group (TCG), Founding Director of UNESCO's UNITWIN Global Network of Higher Education in the Performing Arts, and Founding Artistic Director of the StreetSigns Center for Literature and Performance, an award-winning socially-engaged professional theatre founded in Chicago and now based in Chapel Hill NC.    He received his Ph. D. in Performance Studies from Northwestern University.