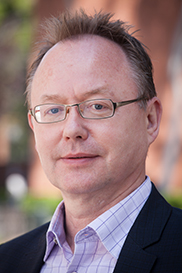 Wolf Gruner holds the Shapell-Guerin Chair in Jewish Studies, is Professor of History at the University of Southern California, Los Angeles since 2008 and is the Founding Director of the USC Shoah Foundation Center for Advanced Genocide Research since 2014.

He is a specialist in the history of the Holocaust and in comparative genocide studies. He received his PhD in History in 1994 from the Technical University Berlin as well as his Habilitation in 2006. He was a postdoctoral fellow at Harvard University, Yad Vashem Jerusalem, the US Holocaust Memorial Museum, Women’s Christian University Tokyo, and the Center for Jewish Studies Berlin, as well as the Desmond E. Lee Visiting Professor for Global Awareness at Webster University in St. Louis.

He is the author of ten books on the Holocaust, among them “Jewish Forced Labor under the Nazis. Economic Needs and Nazi Racial Aims”, with Cambridge University Press (paperback 2008), as well as over 60 academic articles and book chapters. He also coedited two books, one of them, the translated updated book “The Greater German Reich and the Jews. Nazi Persecution Policies in the Annexed Territories 1935-1945” was published in 2015. In 2015, Gruner published on the discrimination against the indigenous population in post-colonial Bolivia the book „Parias de la Patria“. El mito de la liberación de los indígenas en la República de Bolivia 1825-1890”, in Spanish with Plural Editores, Bolivia.

Gruner’s most recent book deals with the persecution of the Jews in the Protectorate of Bohemia and Moravia and their responses 1939-45 (Wallstein, Göttingen, Germany, 2016). This book, soon to be published in English and Czech, received the award for most outstanding German studies in humanities and social sciences in 2017, the Sybil Halpern Milton Memorial Book Prize of the German Studies Association 2017 for the best book in Holocaust Studies in 2015-2016 and was a finalist for the Yad Vashem International Book prize for Holocaust Research 2017 in the best book in 2015 and 2016.