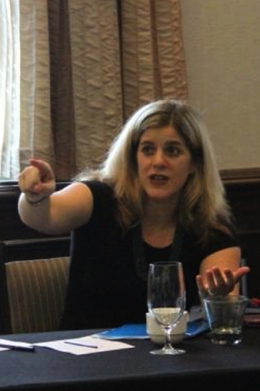 Kim Simon is Managing Director of the Shoah Foundation Institute at the University of Southern California. She is responsible for overseeing the Institute’s day-to-day work, including its educational programs, research, documentation activity, public outreach, and administration. Simon was hired in 1994 to coordinate the Shoah Foundation’s efforts to collect interviews around the world with Holocaust survivors and other witnesses. After the testimony collection phase, Simon established the Institute’s office of global partnerships, creating and developing its international program agenda, overseeing its work in 17 countries. Kim Simon spent the last 15 years working in the field of Holocaust video documentation and education. Prior to her post as Managing Director, Simon served as the Institute’s interim executive director from 2008-2009 and director of programs, overseeing its national and international educational agenda. Simon currently serves on the U.S. delegation of the Task Force for International Cooperation on Holocaust Education, Remembrance and Research. She is overseeing the development of an educational application, IWitness, and focused on the pedagogical, organizational, and policy considerations of working with Holocaust and genocide survivor and witness testimony in an online environment. IWitness is a multimedia application that aims to engage the intersection of using video testimony on the Internet as a way to explore multi-literacies and the topic of the Holocaust and other genocides in education. In September 2011, Simon was awarded an Alumni Honorary Doctorate of Humane Letters from her alma mater, Colorado College.