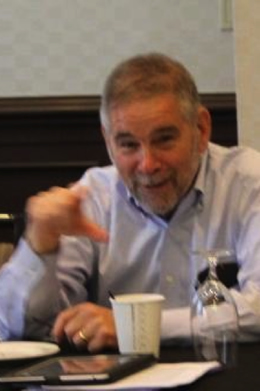 He was the Executive Editor of the Second Edition of the Encyclopaedia Judaica that reworked, transformed, improved, broadened and deepened, the now classic 1972 work and consists of 22 volumes, sixteen million words with 25,000 individual contributions to Jewish knowledge. The EJ won the prestigious Dartmouth Medal of the American Library Association for the Outstanding Reference Work of 2006.

Berenbaum is the author and editor of twenty books, scores of scholarly articles, and hundreds of journalistic pieces. Of his book, After Tragedy and Triumph, Raul Hilberg said, “All those who want to read only one book about the condition of Jewry in 1990 would do well to choose Michael Berenbaum… In his description of contemporary Jewish thought, he sacrifices neither complexity nor lucidity.” Charles Silberman praised The World Must Know as “a majestic and profoundly moving history of the Holocaust…It is must reading for anyone who would like to be human in the post Holocaust world.” The Village Voice praised Anatomy of the Auschwitz Death Camp with, “The scholarship, broad and deep, makes this the definitive book on one of our century’s defining horrors.”

His most recent books include: Not Your Father’s Antisemitism, A Promise to Remember: The Holocaust in the Words and Voices of Its Survivors and After the Passion Has Passed: American Religious Consequences, a collection of essays on Jews, Judaism and Christianity, Relgious Tolerance and Pluralism occasioned by the controversy that swirled around Mel Gibson’s film, The Passion. Johns Hopkins University Press has recently published a second edition of The World Must Know. He is also the editor of Murder Most Merciful: Essays on the Moral Conundrum Occasioned by Sigi Ziering The Trial of Herbert Bierhoff.

Among his other works are A Mosaic of Victims: Non Jews Persecuted and Murdered by the Nazis, The Vision of the Void: Theological Reflections on the Works of Elie Wiesel, and Witness to the Holocaust: An Illustrated Documentary History of the Holocaust in the Words of Its Victims, Perpetrators, and Bystanders. He was co-editor on several works, including The Holocaust: Religious and Philosophical Implications (with John Roth), The Holocaust and History: The Known, the Unknown, the Disputed and the Reexamined (with Abraham Peck), and most recently, The Bombing of Auschwitz: Should the Allies Have Attempted It? (with Michael Neufeld). He is the author of A Promise to Remember co-editor of Martyrdom: The History of an Idea.

In film, his work as Co-Producer of One Survivor Remembers: The Gerda Weissman Klein Story was recognized with an Academy Award, an Emmy Award and the Cable Ace Award. He was the historical consultant on The Shoah Foundation’s Documentary, The Last Days that won an Academy Award for the best feature-length documentary of 1998.

He was the executive producer, writer, and historian for a film entitled Desperate Hours on the Holocaust in Turkey, which was broadcast on Public Television in the fall and is a consultant and interviewee on several broadcasts, most recently, Imaginary Witness: Hollywood and the Holocaust, which was broadcast on the BBC in England and on AMC in the United States. He was Executive Producer of Swimming in Auschwitz, the story of 6 women Holocaust survivors, which appeared on PBS in the spring of 2009. He also was the commentator for the National Geographic’s Master’s of Death and Scrapbook from Hell two documentaries, the first on the Einsatzgruppen, the Mobile Killing Units, and the second on the Auschwitz album of the perpetrators.

Berenbaum was the conceptual developer on the Illinois Holocaust Museum and Educational Center that recently opened in Skokie, and played a similar function as conceptual developer and chief curator of the Belzec Memorial at the site of the Death Camp. He is currently at work on the Memorial Museum to Macedonia Jewry in Skopje.

For his work in journalism, he won the Simon Rockower Memorial Award of the American Jewish Press Association three times in three different categories during a two-year period. He has been featured on Nightline and the Today Show as well as National Public Television.

Berenbaum takes special pleasure in his work as a teacher. His course at Georgetown was named by the student newspaper as one of the ten most important courses in the University. Among his former students was the famed American entertainer, Pearl Bailey, who wrote of Berenbaum: “The wisdom I gained from his class is priceless. He is young, aggressive, tough, wise as some sages of yore, and as brilliant as a diamond. When class ended, you felt filled, drained, and filled again.” (Pearl Bailey, Between You and Me)

Berenbaum is a graduate of Queens College (BA, 1967) and Florida State University (Ph.D., 1975), and also attended The Hebrew University, the Jewish Theological Seminary and Boston University. He has won numerous fellowships including the Danforth Fellowship, the George Wise Fellowship at Tel Aviv University, and the Charles E. Merrill Fellowship at FSU. Berenbaum was an elected fellow of the Society for Values in Higher Education. He was given a Doctor of Divinity (honoris causa) from Nazareth College in 1995 and a Doctor of Humane Letters (honoris causa) from Denison University

He is married to Melissa Patack Berenbaum, who is the Vice-President and General Manager of the Motion Picture Association of America, California Group. He is the father of four children: Ilana, a Brown University honors graduate, who was ordained as a Rabbi by the University of Judaism in May 2001 and is working on her Ph.D. in Midrash as UCLA; Lev, who graduated from Georgetown University and is a Washington-based businessman; Joshua, born in December 1998; and Mira, born in May, 2000.